A week ago today, Zach and I were getting home from a 3-day triathlon camp that was hosted by Team MPI in Henderson, Nevada. I have been intending to write a post about camp ever since we got back, and I finally sat down to follow through on that intention today.

We arrived at camp on Wednesday evening for a Thursday morning start. There were 8 total campers, including me & Zach, and 3 coaches from Team MPI who were leading the camp. We came from all over the country – Iowa, California, Idaho, Mississippi, Florida, and Colorado – to this abnormally windy location south of Las Vegas for 3 intense days of training (1 camper had gone early for the 5 day camp, so she already had 2 days under her belt when the rest of us arrived). The intensity of the bike training during camp was amplified by the wind, and according to weather forecasts the wind only lasted the few days we were there and then it went back to normal non-windy conditions… 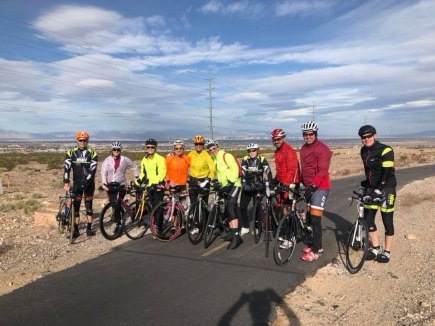 I had done a 6 hour bike ride that previous Sunday plus a long swim Monday and a short ride on Tuesday, so my body felt like it was still recovering from that when we set out for this ride. The other girls in my group were stronger than me on the bike, so I was having to push myself to keep up with them and was struggling a bit with not knowing what hills were coming next and wondering when we were going to hit the dreaded uphill drainage ditch I’d already been hearing about from people at camp who had ridden this loop before. I was also uncomfortable with the wind because I had my wider-rimmed race tires on, and they are perfect for catching cross-winds and pulling my bike momentarily out of my control (more on this later). Despite the challenges, we completed the 40 mile loop and I was left wondering if I would possibly make it through the full 3 days of camp (I really wasn’t sure at that point because this ride was tough on me both physically & mentally).

Lucky for me, the next activity was lunch, and then we hit the pool. Swimming is my strongest of the 3 disciplines, so I’m usually happy when it’s time to jump in the water. I find it so freeing to be able to take my leg off and just swim because there are no worries about my prosthesis fitting weird that day or rubbing my leg and giving me sores, and I just get to use the body I was given (without any artificial parts attached) to move freely. I was among the faster swimmers so that helped me regain some of the confidence I had lost on that morning’s bike ride.

After the swim, we set out for a run around the park by the pool and I did a solid 4 miles with two of the other girls at camp. They set the pace a little faster than I would have chosen if I was by myself, but I was able to hang on for 4 miles and it felt great to have accomplished that after already putting in the time on the bike and in the pool. I was exhausted, but more hopeful that I could get through camp (and ultimately Ironman Boulder in 3 months).

Day 2 started in the pool, so I was of course happy about that. We then set out for a shorter ride of around 25 miles with only about 2,000 feet of climbing (and 50-60 mph wind gusts), but this one required us to go up 3 super steep hills – the 3 sisters (we had a different name for them) – on the way back to our hotel. I was able to get up 2 ½ of them, but ended up having to walk up the last half of the 3rd bit… uh, sister. Hills can be tough for me because my knee height discrepancy make me a little wonky when I stand up to pedal – I can do it, but it’s not as smooth as cyclists with two biological legs. I was disappointed that I wasn’t able to get up all 3 of the big hills, but gained knowledge and skills in other ways that day that sort of made up for it. For example, Coach Adam helped us learn how to handle our bikes in the wind gusts and explained not just what we needed to do to stay upright, but the physics of why that made sense in laymen’s terms so we could understand. After that ride, I was exponentially more comfortable riding in the wind, which felt awesome. 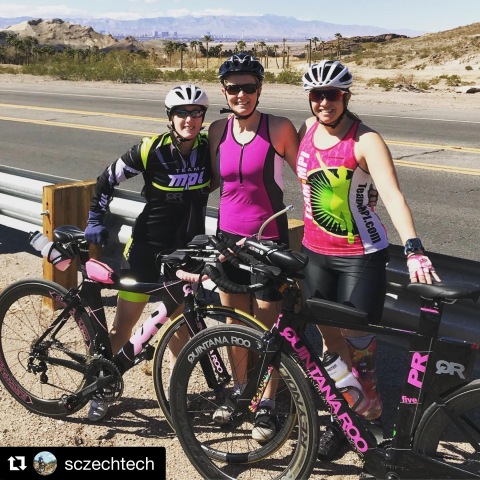 The final piece of training on Friday was a 4 mile trail run on the south end of town. Based on what I heard, this trail run was probably the highlight of camp for many attendees because they don’t have trails like that in Mississippi or Iowa. I started out on the trail, but there were too many loose rocks and I didn’t want to risk injury to my knee, so I ran back and created my own adventure in the neighborhood by the trailhead. I did about 3 miles at a comfortable pace for me, and met the crew back at the car as they finished the trail run.

On the final day of camp, we started our day at the pool and did some timed tests to gauge our fitness. I actually had the 2nd fastest times of all the campers, so that definitely gave me something to be proud about since I was still internally grasping with the frustration of being the slowest on the bike (I’m consistently making gains, but still have so much room to improve).

After the swim, we set out on our bikes one last time (still with wind gusts of around 50 mph), and this time my group was lead by Mark, who is the coach I’ve worked with for the past 3 ½ years, and it was really awesome to actually get to ride with him. The plan was to ride out for a certain amount of time and then turn back to just do about 30 miles, but when we got to the turnaround point, our group decided we wanted to tackle the full loop that we’d ridden on the first day of camp. Remember how frustrated I was after the first day’s ride…? Well, this was my redemption ride and I felt SO much better after tackling the 40 mile loop again. Amber, who was the only rider in the same cycling group as me all 3 days, and I chatted about how we’d felt on the first day at certain points in the ride (like when we got to the last long hill before the downhill portion getting back to the hotel), and Mark laughed at us because we were casually chatting while riding up hills we’d been cursing just 2 days before. The wind didn’t seem as bad that day and we knew what to expect since we’d already done the ride (and I’m sure that helped), but we had made some sort of gain during that short time as well…

The last thing I want to share about camp is that in addition to the amazing opportunity for training, I greatly enjoyed meeting and spending time with the other campers and coaches, both during training and meals as we went to dinner together all but the night we arrived. I gained a lot during those 3 days, and I would be remiss if I didn’t mention the new friends I have whose journeys I can now follow and use as motivation in my own training. All-in-all, camp was a huge success!