For this blog, I interviewed Mariale, who is the mother of a 6-year-old boy who was born with fibular hemimelia (FH), which is the same diagnosis I was born with.  Mariale and her husband chose the leg lengthening process for their son rather than amputating (as my parents did), and I wanted to help share their story so people can understand that this is a complex and difficult decision with no right or wrong answer.  Whether a family chooses amputation or leg lengthening, we all need to support each other on these emotional and challenging journeys.  Thank you to Mariale for sharing this glimpse into your life!

Can you tell me a little about yourself, your son (including current age), and your family?

My name is Mariale, I’m 39 years old, married for the last 12 years to Seiichi and we have been together for 19 years, and I’m the mother of 2 wonderful kids.  Sanae, age 9, she is a very active and open little girl who is always making new friends, and Shigue, (short for Shiguetoshi), he is my FH boy, he is 6 years old and is finishing K3 and soon to be going to grammar school. We live in Mexico City, both me and my husband work full time, he works at a Japanese trading company, and I run the family business, that is a service agency for fast food restaurants equipment. 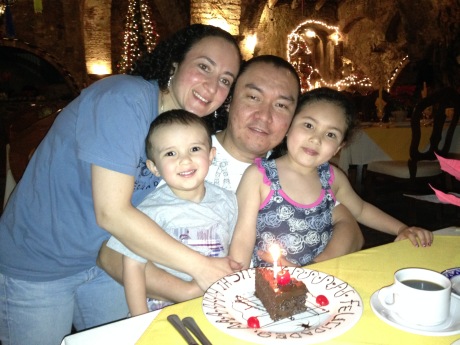 We found out on our schedule 34 week ultrasound.  It was a surprise because on all the other ones nothing showed, but in a way it gave us time to prepare.  The doctor was honest with us, and told us that he didn’t know what it was, all he could see was a shorter leg, but in his 30 some years as an Obstetrician he had never seen anything like this. So he sent the ultrasound to a genetic specialist to find out if something else was wrong, and the results were ok, it was only a discrepancy in the leg. We were almost to our due date so all we could do was wait and see until he was born.

What was your immediate reaction when you received the news about your son?

Shigue was born on November 13th, 2011. Like any other birth it was full with excitement and happiness – he was a strong, pink, crying little thing, with one tiny left leg and 4 toes. They rushed this little 3.1 kg baby for a bunch of tests, and after a few days the doctors had a diagnosis. He gave us this 2 mile long diagnosis that was something like “CONGENITAL FIBULAR HEMIMELIA WITH MISSING METATARSALS OF THE PROXIMAL BONE AND XXXXXX.” I can’t remember what else…  So the first thing that came to my mind was, my son is going to die, and I guess that was what my face and my husband’s face was showing because the doctor immediately corrected himself and said, ohh he is ok, he is only missing one bone.

I thought, “God, can you please start from there!!!!” I honestly couldn’t understand the need to give such a mouthful of complicated words that only scare you half to dead, rather than just saying, everything is ok, he’s missing a fibula bone on his left leg, and it is called Fibular Hemimelia.  He handed us some copies of information about it and with that short diagnostic of Fibular Hemimelia on our hands we started researching and making calls. We soon found out that FH is not very common and that many doctors didn’t know what we were talking about.  My brother-in-law recommended that we contact Shriner’s hospital in Mexico City. We did, and they gave us our appointment for October 5th, 2012, almost a year after Shigue was born.  So, in that first year, we only researched.

I found out about a group on Facebook and through that group got the info for Dr. Standard at The Rubin Institute for Advanced Orthopedics in Baltimore and Dr. Paley at The Paley Institute in Florida, both known for their work in reconstructive surgery of congenital defects. I found out about superankle surgery and what a lot of kids have gone through, so we decided to try and find out if our son was a candidate or not for reconstructive surgery, and for that we waited 11 months for our appointment in Shriner’s. We also sent x-rays to both Dr. Standard and Dr. Paley to find out what they said

What options did doctors recommend for your son?

Here comes the fun part… Shigue was diagnosed with a type 3 FH, which is a mild to severe kind of FH.  Dr. Paley and Dr. Standard both agreed that he was a very good candidate for superankle and reconstructive surgery, and although they would need further analysis to make a surgery plan, as far as they could see on the x-rays, he had a good-enough ankle to handle the procedures.

In Shriners we got a whole different story.  Since Shigue’s case was borderline severe, they did not have 1, but 3 clinical sessions, to come up with a surgery plan.  The clinical session at Shriner’s was where all the doctors gather around and discuss the case, and through that they decided that the best option was to amputate.

By this time Shigue was about a year and a half old, and had started walking with his AFO’s (ackle foot orthoses).  So, we had 2 different expert opinions and we had to decide what we believed was right for Shigue.

Which option did you choose?  Why?

We chose lengthening because after all we had seen online, and after doing some very, very extensive research, we came to the conclusion that we wanted to give Shigue´s leg a chance.  For me, amputation has always been so final, and with lengthening you can always make little corrections here and there, and if something didn’t go as planned, we could always come back to amputation, but not the other way around.  Also, we had been assured that Shigue was a good candidate for lengthening, which is not every case for everyone with FH, so we might as well go for it.  It was not an easy choice for several reasons, and the most important one was eventually money.  We had to figure out how we were we going to travel to another country to make all this happen. So, we started a Facebook page for 2 reasons: one to do fundraising for our son, and two, to translate all the information we gather to Spanish.  This is a one in 75000 births, so there must be other people out there in the same situation we are in, so we could start to help spread the word

We got such a good response that we decided to start a foundation called “Lets help others walk.”  Our main goal is to create awareness about FH, and to give all the information we can find on the 2 treatments.  I’m a strong believer that both paths are ok, and it all comes down to what is good in your gut, for your child, and your family.  You can see all this here (it is in Spanish though).  (Side note from Emily: Mariale also graciously translates some of my blog posts to Spanish so they can be accessed by families in this Facebook group) www.facebook.com/HemimeliaPeronea

Is your son aware of his limb difference?  Does he see himself differently than he sees his friends?

Yes he is – we have always talked about his little foot, and how all the people have different things, like mommy has glasses, daddy has small eyes, his sister has long and not so curly hair, so an extra bone here and there is not that much.  He knows he has one toe less than his friends, but so far he is ok with this, and considers this his normal difference with the others.  He knows that the doctors work on his little leg to help it catch up with his big leg.  On a side note, while he was on his fixator for his lengthening, he was explaining the process to his cousin, a girl about 12 years old who was sort of shocked, hahaha. He was very honest, and saying, “so they break the bone, and this things here turn and make my leg grow, and this thing here holds everything in place,” and so on… She finally turned to him and said, “you are such brave and special child!”  He looked at her and said, “Noooo, I’m not special, special people can fly!!!!”  As you can see, he is pretty ok with his little leg.

What sorts of things does your son enjoy doing?

Everything, he loves to build stuff with his legos and do puzzles when we are in doors.  Plants Vs Zombies is an all-time favorite right now.  When we get the chance to go on holiday he loves to swim and run and play sports. In school he’s always playing and running around with his friends, just like all his friends.

Do you ever think he feels limited?

Only the first couple of days after his surgeries, and that only lasts like 2 weeks.  After he re-learns how to walk, we have trouble keeping him still.  Last year he had a fixator, and the coach from soccer told us that the fixator was an “advantage” against his friends because he was kicking everyone with it… So no, he is not limited at all.

If you could tell parents one thing about raising a child with a physical difference, what would you tell them?

To never hold him (or her) down.  Sometimes we tend to overprotect our child (with our without a physical difference), and they need to learn on their own what they can and cannot do.  I also think you should always support them and push them to go forward and to just keep trying.

This is an emotional journey and we have our good days and our very bad days, but once you have made the decision of what path to choose on the treatment for FH, don’t let anyone tell you that you’re wrong.  There are no right and wrong choices here, only different paths for different families, from which we all can learn so much.  Love and good luck.